January 2, 2014 – The merger is now complete, and the National Low Income Energy Consortium and National Fuel Funds Network officially have combined to form the National Energy and Utility Affordability Coalition (NEUAC), concluding a process that began in earnest in 2011.

The two nonprofits had worked together for more than 25 years and, since 2006, had partnered in presenting the nation’s largest annual gathering devoted to energy assistance for low-income households – the National Energy and Utility Affordability Conference, from which the new organization takes its name.

The merger was announced on November 7 after the NFFN and NLIEC boards of directors gave it unanimous approval, but the agreement could not be finalized until it was recorded by the secretaries of state from the states where the NFFN (Missouri) and NLIEC (Delaware) originally were incorporated.

“That happened on November 14, and we received the confirming paperwork December 17, so everything is official,” said NEUAC Co-President Skip Arnold, executive director of Energy Outreach Colorado in Denver. “Finally, our two organizations are one.”

Co-President John Rich, executive director of the Mid American Assistance Coalition in Kansas City, MO, said the agreement was coming at a very exciting time, since 2014 marks the 30th anniversary of the founding of the NFFN by the late Sister Pat Kelley.

“Sister Pat was intimately involved in both NFFN and NLIEC, and her vision remains the bedrock of the work that will continue under the new banner of NEUAC,” Rich said.  “With Sister Pat Kelley’s vision as a guide, we move forward toward common goals and see now as the perfect time to unite for a singular focus.”

NEUAC is a broad-based coalition of diverse organizations dedicated to heightening awareness of the energy needs of low income energy consumers, fostering public-private partnerships and engaging in activities to address these needs. To meet that mission, it set five goals:

The initial NEUAC governing board consists of 28 current NLIEC and NFFN board members representing utilities, energy suppliers, non-profits, and fuel funds.  They are led by a five-member executive committee comprised of two co-presidents, a secretary and two co-treasurers. NEUAC also will have an advisory board whose members will be encouraged to participate in its meetings but not have voting privileges.

NEUAC will continue to conduct the two signature events held by its predecessor organizations:  Washington Action Day for LIHEAP and the National Energy Affordability and Utility Conference.

Action Day 2014 will be held Wednesday, March 26. It will give NEUAC members the opportunity to visit their local representatives in Washington, DC, to advocate for the Low Income No Deposit Bonus With No Max Cashout Energy Assistance Program (LIHEAP) and to educate lawmakers about the need for and benefits of energy assistance for low income families. LIHEAP is one of the nation’s most important energy safety-net programs, and advocacy is an important part of the survival of this vital resource.

The 2014 National Energy and Utility Affordability Conference will be held Wednesday through Friday, June 18-20, 2014, at the Sheraton Kansas City Hotel at Crown Center in Kansas City, Missouri.  It is expected to draw 750-800 participants, topping the record attendance of 703 set at NEUAC 2013 in San Diego, California.

“One of the primary reasons for the merger was to enable the new organization to do even more for our members,” Arnold said. “NEUAC  will look to offer more elements to its basic programming, more member benefits and even more in the way of communications. Doing more simply makes sense.”

June 12, 2013 – A longtime advocate for low-income families, one of the first people to chair the National Fuel Funds Network and the retiring chairperson of the National Low Income Energy Consortium has been presented with NLIEC’s highest honor.  Cindy Datig, the chief executive officer of the Dollar Energy Fund in Pittsburgh, received the NLIEC Achievement Award at the conclusion of the 2013 National Energy and Utility Affordability Conference in June at San Diego. 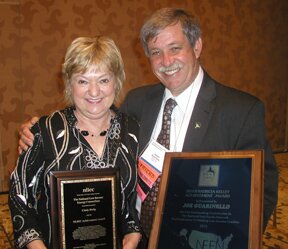 In presenting the NLIEC Achievement Award to Datig, NLIEC Vice Chair Skip Arnold of Energy Outreach Colorado noted that Datig has been with the Dollar Energy Fund for 27 years.  During that time, he said, Dollar Energy "grew from two employees and $500,000 in revenue to over 100 employees and $20 million in annual revenue.  In that time, Dollar Energy Fund assisted more than 350,000 families with over $100 million in utility assistance grants." The organization now operates in seven states.

"Cindy has been a trusted advisor and mentor for many of the people in this room," Arnold added.  "Her footprints in the energy assistance world are very deep."

The award recognized Datig for "her tireless devotion to helping low-income customers and unswerving support of NLIEC through service as its chairperson and as a member of its Board of Directors” and said, "Her steadfast commitment to NLIEC has been demonstrated by outstanding leadership and compassion. Through her many creative contributions to and support of energy assistance, she has been a living example of dedication to community service.”

Datig told conference attendees that she will be retiring and that NEUAC 2013 would be her last conference as a member of the NLIEC Board.